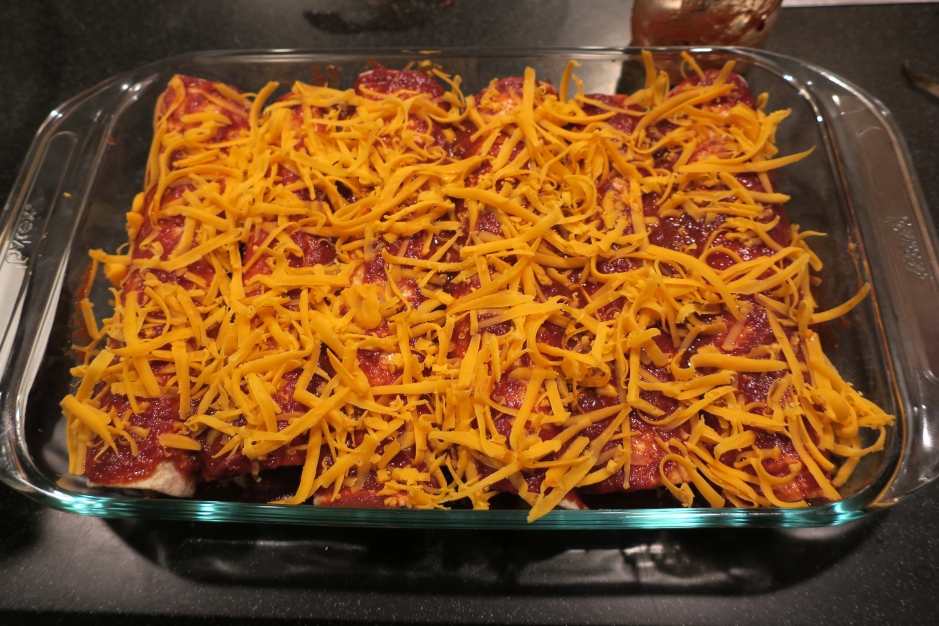 I endured many hardships in writing this post. (I know what you’re thinking: there’s no way that’s true. She’s sitting comfortably in her house having just eaten leftovers of the dish she is posting about. What could she possibly have to complain about? Well don’t you fucking even start!)

First of all my free photo editing software crashed and I was worried I’d have to update it, but then it started and it was fine (again, I know what you’re thinking: she edits her photos? Yeah, I do. I spend like 20 seconds toiling over the free editing software that I almost kind of know how to use.)

Then, I had to find my hobo gloves because my hands were just slightly too cold and I thought I might die if I couldn’t experience 100% physical comfort in that moment.

Then, I found out that I’m in school again. Wasn’t I in school long enough? I thought so. I told them I was over 30 so they should just give me a fucking master’s degree and the first person I talked to was like “yeah, obvi” but then the second person was like “no, you have to complete the requirements and blah blah blah.” That second one was an exact quote.

And then I had to go comfort my chickens who are still super traumatized from Mary Ellen’s last post.

Anyway, I’ve come across a bunch of vegetarian recipes that use jackfruit. They all start off by talking about how jackfruit is fucking disgusting smelling just like durian which begs the question of how anyone ever started eating foods that make you gag when you try to cut into them. So I went the obvious route of buying canned jackfruit which doesn’t make you vomit when you open it. And then I made enchiladas which are probably more like smothered burritos, but I’m not changing the title.

2 cups enchilada sauce (I used homemade sauce from this recipe)

6-8 tortillas, depending on how thick you like your enchiladas

Taco seasoning (I used a homemade blend from this recipe)

1 or 2 cups of veggies to throw in (optional- I used frozen zuchinni, with disappointing results, but other veggies generally work well)

Cook your rice and lentils if you didn’t already do so because you were being lazy.

Chop up the jackfruit. I followed the instructions from this site to shred them, but it was way too much work and I’m just going to chop it all up and let it cook down next time. I don’t think there’s anything wrong with eating the seeds or the tough parts and the random seeds that I missed picking out tasted fine.

Cook the jackfruit with a little olive oil and taco seasoning for a few minutes, then mix it with the rice and lentils in a large bowl. Add in cheese, a little enchilada sauce (maybe ¼-½ cup) and any veggies you are using. 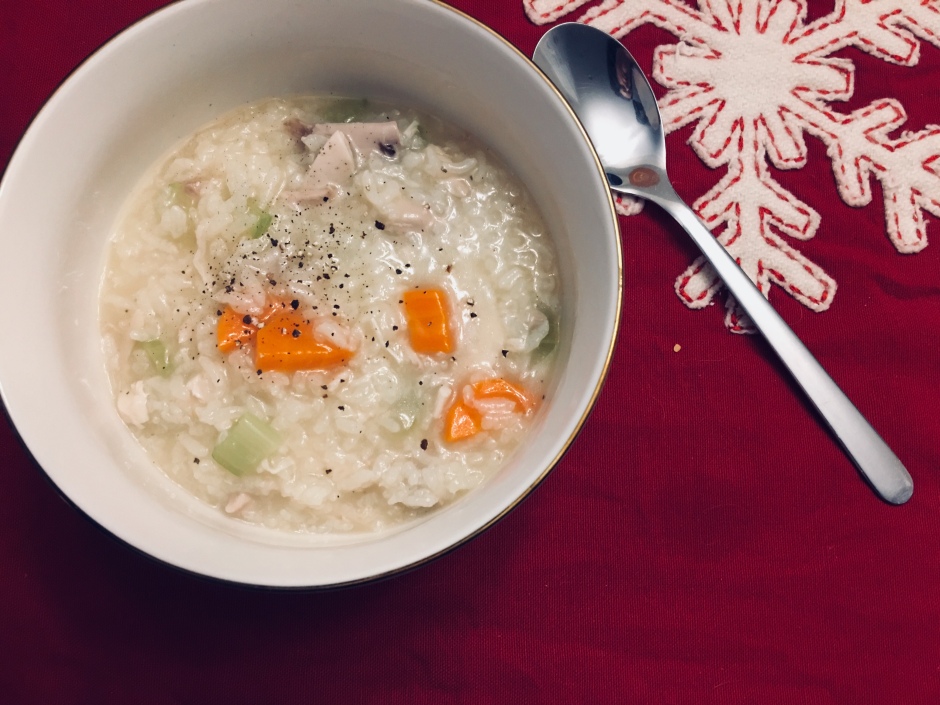 I forgot to post last week. I have no excuse, because I did the recipes and had all the pictures and most of it written and I just forgot. I’m not sorry. I’ve mostly been busy playing Skyrim so I have a very good excuse.

I went insane at Costco recently and bought a ton of chicken. All sorts of chicken. And then I also decided to get some whole chickens and be like, super amazing with my cooking. But then I just made porridge.

If you’re unaware, you can buy a PACK of two whole organic chickens at Costco. For the people who are on a budget, and love eating chicken all the time, buying it Whole is way more cost effective. Worried it’ll take more time to prepare? Worried that it’s scary? Worried you’ll fuck it all up and you should have just gone with your usual dry-ass chicken breast recipe that you’ve convinced yourself is good enough? Well, unfortunately, your first two worries are probably correct but the last one is not.

Follow me while I take you on a chicken journey.

It all started when I decided I wanted to make dakjuk. I was about to just do a recipe that used all my regular techniques of cutting corners and using store bought, pre-prepped stuff, but then I found this lady. She mentions, subtly, two ways she makes her porridge and I was so intrigued by the prospect of boiling a whole chicken because it sounded so gross I needed to try it. 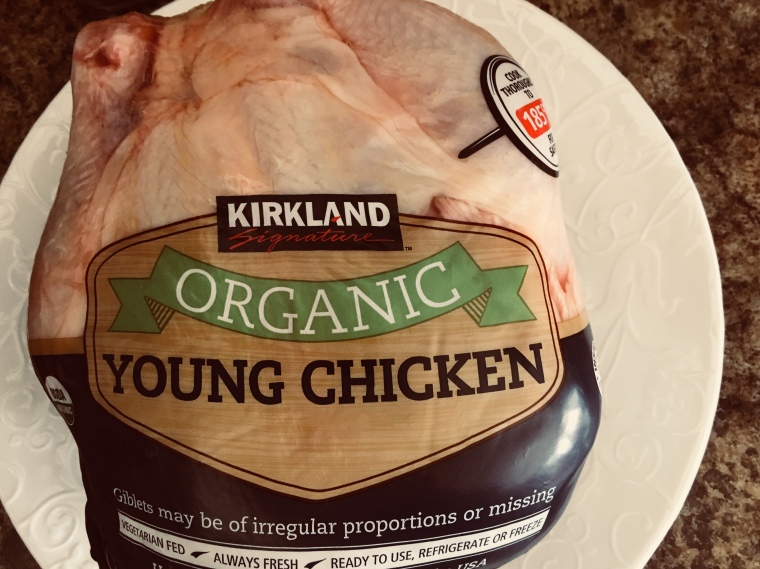 Oh Costco. I love you so much. 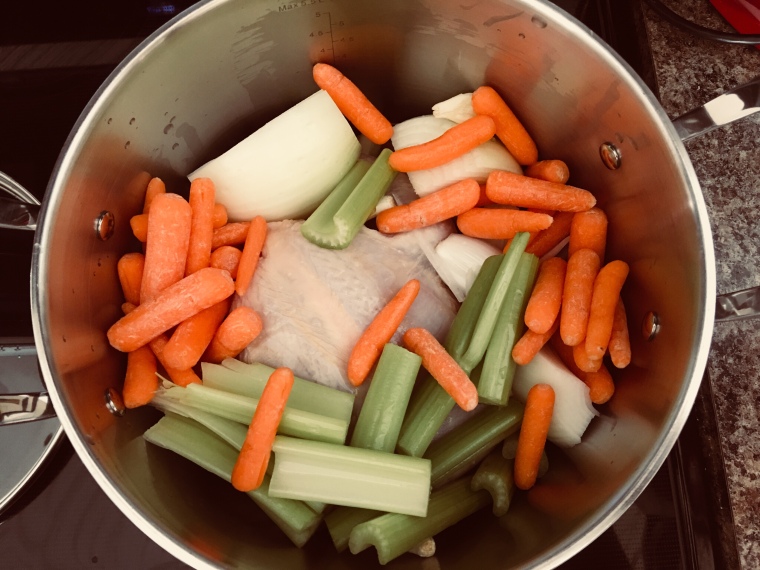 So, a different lady’s blog that I browsed while trying to figure out what boiling chickens was like was a bit of a mental case about it. She acted like it was the most disgusting thing in the world and that she really only does it to save money, etc etc and prayed to Jesus the whole time because it was so hard for her. And I really wanted to hold her close and whisper, “honey, Jesus doesn’t want you to suffer so in His name. Just use gloves, bitch.” 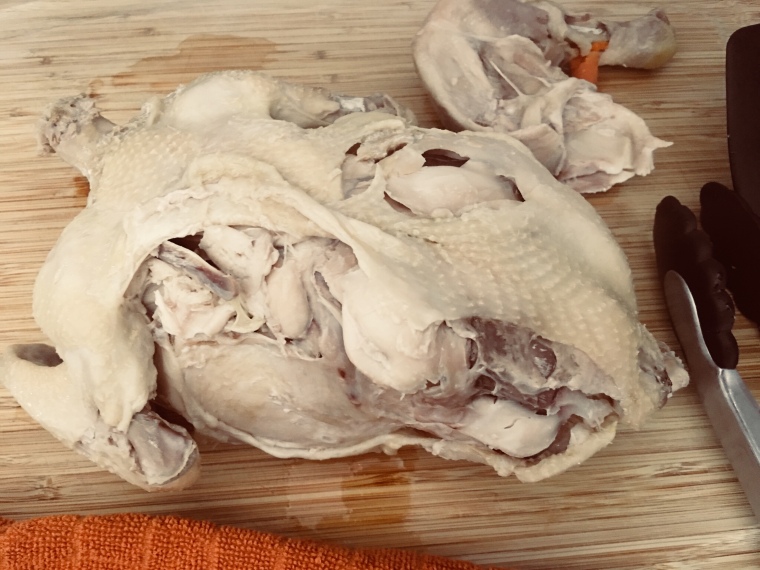 See it’s not so bad.

Anyway, it wasn’t that bad. I mean, I was expecting a lot of bad after reading her post, but it was pleasantly easy and not bad at all. Also, you don’t need a recipe. Throw the chicken in a big pot and boil it with some veggies for an hour. Remove the chicken, debone it, add bones and more water to the pot, and boil for another hour. Strain and you have your stock. It’s easy as shit. 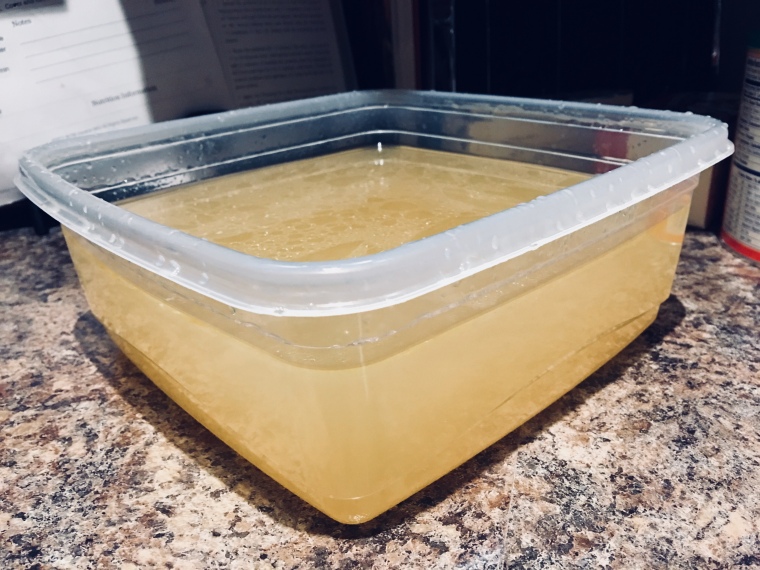 It makes a lot of stock. 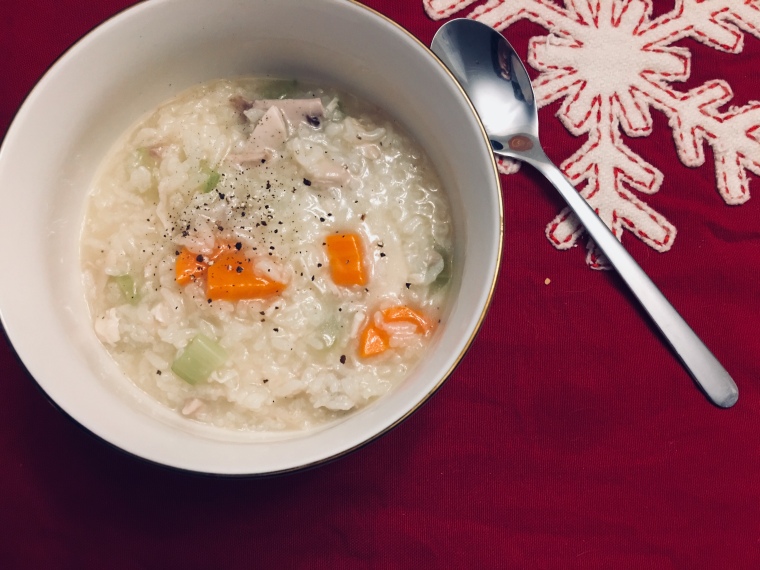 So, boiled chicken (when you do it with veggies on the bone with skin) is actually really good. I used this recipe for dakjuk and holy crap it was amazing. Seriously, it will forever replace chicken noodle soup as my sickly comfort food, and it is a nice dish to have to rest my body after a weekend of donut binging. Make like three times more than what the recipe calls for because it won’t be enough. 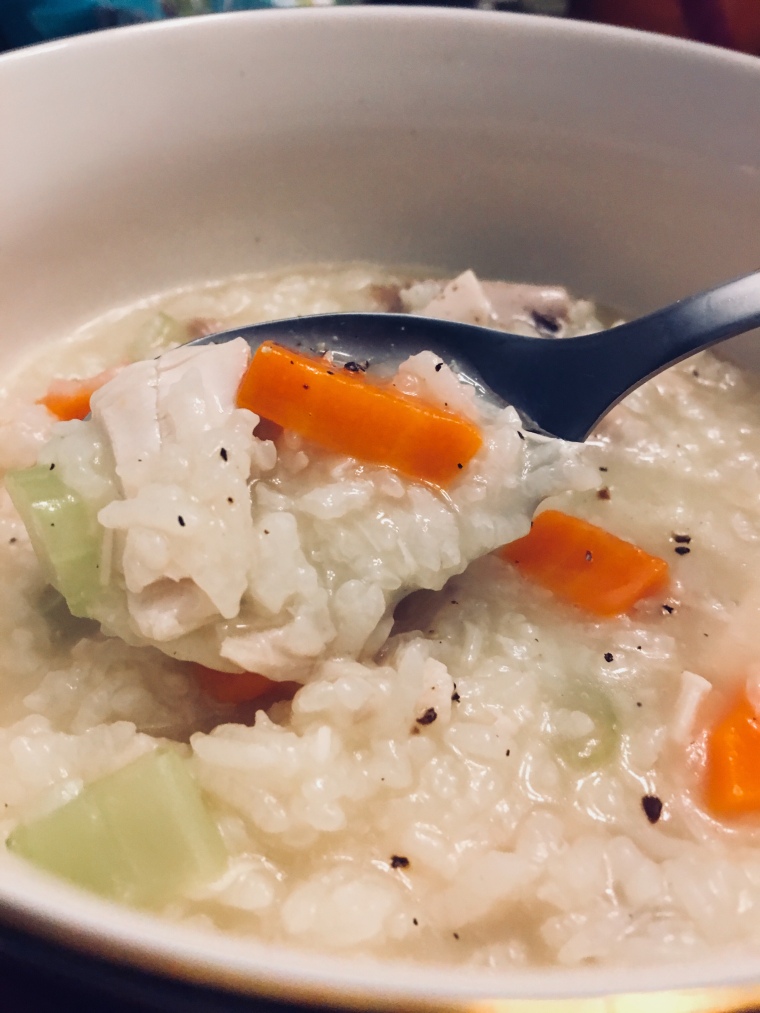 So what did I do with the other chicken? I roasted it. I’ve never roasted a whole chicken before either, and everyone has a really fancy recipe that makes it intimidating. Through the Korean Bapsang blog I found this recipe. 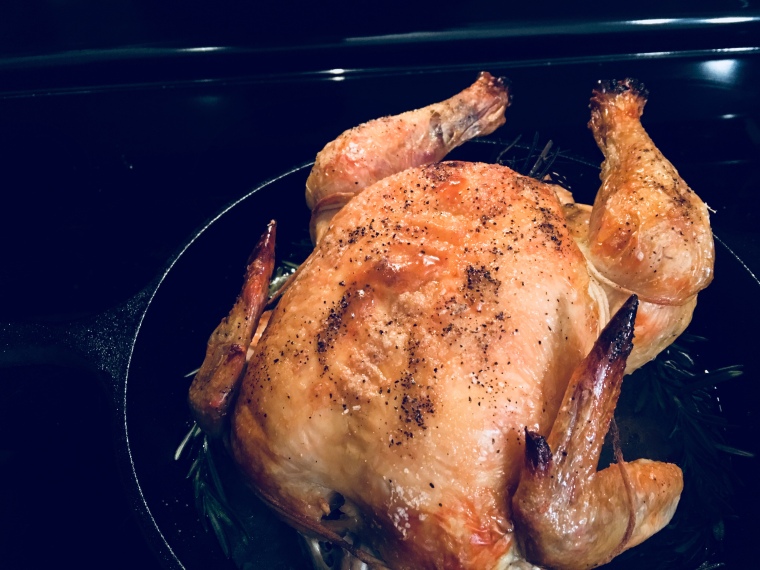 However, I like to be thorough, so I trussed the chicken like this. It actually did produce a better roast, though I don’t have much to compare it to, except turkey at Thanksgiving, which always cooks unevenly I feel like. Anyway, we ate some of this for dinner one night and then the rest got chopped up and mixed with the leftover boiled chicken and I made the most amazing chicken salad sandwich that I’ve ever had in my entire life. Mmmm chicken chicken chicken.

So there you go. That’s what I’ve been doing lately. Sacrificing chickens left and right while also leveling up as a khajiit in Skyrim is how I’m fulfilling my New Years’ resolutions. I’m sure Serafina is crying and totally traumatized at this point, trying to comfort her chickens because she reads this blog out loud to them and I must admit it was a bit of a hostile post. Don’t worry I’ll post about something less chickeny next time. 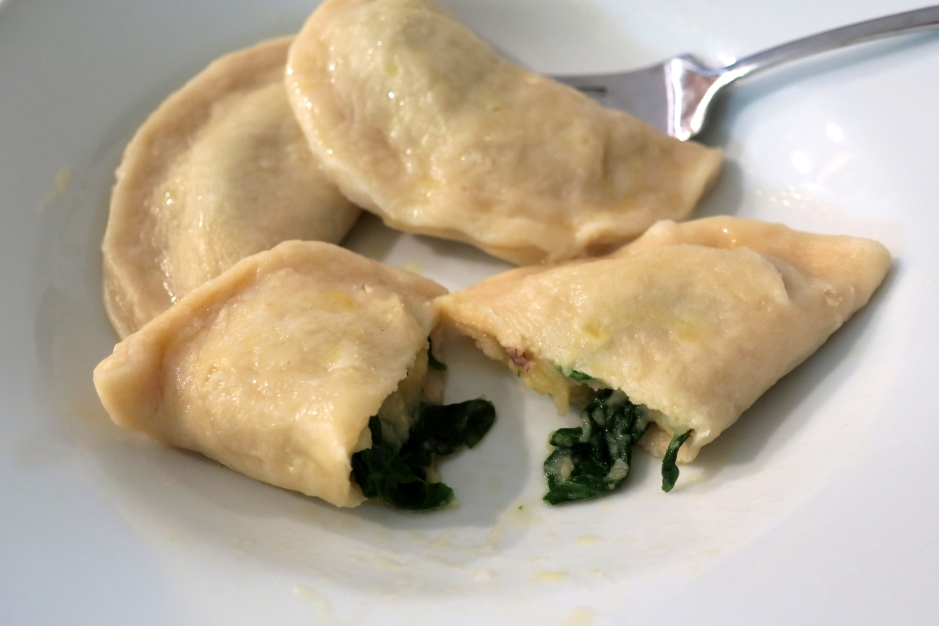 I was reflecting on my life as I welcomed 2018, and I realized that there’s something missing. Despite all of my grad-schooling, working in a meaningful career, and raising a family of chickens, I have some serious life goals that I am not pursing. I’m of course talking about my dream of being a babushka. You see, I have some Russian ancestry, and now that I’m pushing 67 (or 32, or however old I am*), I need to really focus on becoming my true self.

After this epiphany, I decided to take a hard look at my life and start making some serious changes. I mean, #newyearnewyou, right? With that, I am embarking on my babushka adventure. My amazon cart is full of various styles of head scarves, but this is going to take more than a wardrobe change. It’s time to make some fucking perogies.

I scoured the internets for perogy recipes and ultimately created this masterful hodgepodge recipe.

1 pound of potatoes, cubed (I used red potatoes and didn’t bother peeling them)

About ½ tsp garlic powder (or one clove of garlic, minced)

¾ cup or so grated cheddar cheese

Combine flour, water, salt, and egg and knead until smooth. Most recipes recommend refrigerating the dough, wrapped in plastic wrap, while you mix the other ingredients together which seems sensible enough.

Boil your potatoes until they are tender. Save some potato water, you might need it if your filling is too dry. Then mash with a little butter and salt (we’ll salt some more at the end too). Set aside.

If you can handle using real garlic and onion, you’d want to sauté them in some oil to start out. If you’re using good ol’ powdered shit like I do, you can just dump it in when you’re sautéing the spinach. Add in the cheeses and mashed potatoes and stir that shit up.

Now take out your dough and roll it out pretty thin (about 1/8th inch thick was the general internet consensus, but it’s not like anyone uses a fucking ruler in the kitchen, especially not babushkas). Cut the dough into circles with about 3” diameter (my biscuit cutter was about 3.5 inches, which created very large perogies). Plop a scant tablespoon of dough in the center. Wet the edges with some water, then fold over and smush the dough edges together. Place the finished perogies on parchment paper until you are ready to cook or freeze them.

Continue assembling perogies for what will feel like a fucking year, and then when they’re all ready, you can boil them in water. Once they start to float, let them coast for a minute to make sure the filling is done and then they are ready. You can also bake or fry them. There’s a lot of variability in perogy preparation. I haven’t been a babushka long enough to have a really strong opinion here. But serve your perogies with butter and sour cream.

If you want to freeze some of your perogies because you don’t feel like eating several dozen perogies in one sitting, you can freeze them raw and then just boil them frozen when you’re ready. It will take longer to cook if you’re cooking them from a frozen state, obvi.

May 2018 be the year we all become babushkas

*Time for a mini true story: My beloved boyfriend, whom I have mentioned on this blog at least once or twice, recently learned that he didn’t know when his birthday was. I made an appointment for him at the eye doctor and came home to tell him that they had the wrong birthday on file for him. He brushed it off, saying that they always had his birthday wrong, it was a clerical error. Then, they ran his insurance and his insurance also had his birthday one year off his supposed real birthday. His insurance, which is through his employer, should most definitely know when his birthday is. And that, my friends, is when a grown-ass man in his 30’s looked at his driver’s license and said “Whaaaaat?” And then he pulled out his birth certificate. And his passport. And then he called his father to double check all of the legal documents. And then, he took a bath. Because finding out you’re a year younger than you thought you were for your entire life is probably overwhelming.